Here is an assortment of tips to keep in mind when using object oriented design. We cover the following tips in this article:

Problem domain objects is basically an object that can be found in the problem itself. For example, when developing a text editor real-world objects would be, Paragraph, Sentence, Word, ScrollBar, TextSelection etc. While developing a call processing module, the objects might be Call, Ringer, ToneDetector, Subscriber etc.

The next stage in object design is to "invent" objects. These objects are needed to "glue" together objects that have been identified during object discovery. Invented objects generally do not correspond to anything tangible in the problem domain. They are inventions of programmers to simplify design.

Consider the following statement from the requirements:

We discover the following objects from the requirement:

We invent the following objects based on our knowledge of the manager design pattern:

Identifying objects is easy, they should always be nouns. As we have seen in the Circuit Controller example, we picked up nouns from the requirements as classes in our design. Even when you invent classes, keep in mind that they should be nouns. Abstract concepts don't qualify as object names.

Naming the objects is extremely important in object oriented design. Chances are that if you name your object correctly, the designers and maintainers will assign it functionality that fits its name. Also note that, if you have trouble naming an object, you probably have the wrong object. At this point go back and look at the problem again and see if you can pick an alternative object.

In any language, actions performed by nouns are specified using verbs. Why should object oriented programming be any different? Thus make sure all the operation methods should contain verbs.

Thus the Circuit class we discussed earlier would have methods like:

Notice that the methods do not include Circuit in the name (ActivateCircuit, BlockCircuit etc.) as being methods of Circuit its clear that they refer to operations on Circuit.

This one is fairly obvious. When a class inherits from a base class, the name for the new class can be determined just by prefixing it with the appropriate adjective. For example, classes inheriting from Circuit are called AnalogCircuit and DigitalCircuit. Following this convention leads to class names that convey information about the classes inheritance. 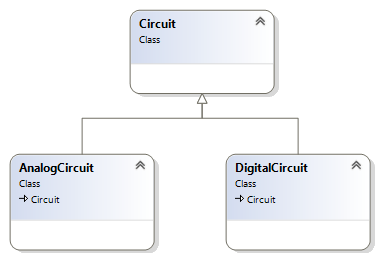 Do not add suffixes to class names

Many developers moving from structured design just continue with structured design in C++. The classes developed correspond more to similar structured constructs they have used in the past. Similarity between C and C++ confuses developers. Make no mistake, object oriented programming is a completely different technique. The emphasis here is to keep the design process simple by minimizing the difference between the problem domain and software domain.

Whenever you encounter a class that has to perform some level of message handling, its always better to model it as a state machine. We have discussed this in the article on hierarchical state machines.

Use const whenever possible

C++ provides powerful support for const methods and fields. const should be used in the following cases:

Proper and consistent use of const will help you catch several bugs at compile time. So start using const from day one of your project. If const is not used extensively from the beginning of a project, it will be close to impossible to add it later.

For details refer to the header file include patterns article.

Don't reinvent the wheel; use STL

The C++ standard template library is extremely powerful. It can save countless hours of coding and testing of complex containers and queues.

Many times while developing classes you might find that a particular class you have developed has just get and set based methods. There are no methods to perform any operations on the object. In many cases, this points to inadequate delegation of work by the caller. Examine the caller of the get-set methods. Look for operations that could be delegated to the class with just get-set methods.

The example below shows a DSP class that has get and set methods. The Message Handler class was doing most of the processing.

If you find that one of the classes in your design has too many methods and the code size for the class is much greater than your average class, consider inventing helper classes to handle some of the functionality of this class. This will simplify the design of the huge class, making it more maintainable. More importantly, you might be able to split the work amongst different developers.

The above class can be made more maintainable by adding private helper classes SignalingHandler and ErrorHandler.

If your design contains multi-dimensional arrays, this might point to missed class identification. The following example should clarify this:

The above two dimensional array points to missed identification of SignalProcessingCard class. This has been fixed in the following code fragment:

Many times, nested loops point to incomplete delegation. May be the inner nesting of the loop should have been delegated to a lower level object. Consider the above example of SignalProcessingCard and DSP.

A class with very large number of methods typically means that fine grain object identification has been missed. At this stage, have a hard look at your design to identify more classes.

This is a very common mistake made by designers new to object oriented design. Inheritance is such a wonderful concept that its easy to go overboard and try to apply it every where. This problem can be avoided by using the litmus test:

Inheritance is the most tightly coupled of all the relationships. Every inheritance relationship causes the derived class to strongly depend upon the base class. That dependency is hard to manage.

Also note that the biggest benefit of object oriented design are obtained from composition and not inheritance. In our earlier example, programmers can develop SignalProcessingCard and DSP objects as if there was only one instance of the object. The multiplicity is achieved by just declaring an array of the objects.

Many times, relationships are better modeled as delegation than inheritance. When in doubt, always consider delegation as an alternative. Sometimes commonality in classes that do not meet the "is a" rule is better implemented by using a common helper class which implements the common functionality. This class can then be included as a member in both the classes.

Consider two classes TerminalAllocator and DSPAllocator which use similar resource allocation algorithms. The two classes have completely different type of interfaces. You might be tempted to model this as both the classes inheriting from a common Allocator class which implements the common parts of the allocation algorithm. In many cases, it might be better to model TerminalAllocator and DSPAllocator as standalone classes with a helper class Allocator included as a member.

This is a common mistake when multiple developers are working on a project. Each developer implements his or her part by designing objects that they need, without considering if other developers have similar objects. This scatters the abstraction of an object into several different objects which implement pieces of the whole objects functionality. In our example, this would mean that the design contains several objects that represent the SignalProcessingCard and DSP objects in different portions of the code. Each developer implement parts of the SignalProcessingCard and DSP functionality that is needed in their domain. This results in scattering the functionality of an object over several incomplete objects.

Needless to say, such code would be difficult to understand and hard to maintain.

Consider group of objects to split work amongst team members

Embedded software developers often split work amongst team members by dividing the functionality into several tasks. With object oriented design, work can be divided in a much more fine grain way by assigning a group of classes to a developer. In many cases you can implement all the functionality in a single task, thus greatly reducing the effort in designing intra-processor communication.

Many times you will encounter a situation where a small class might be useful in capturing some of functionality of a large class. Often developers avoid adding such classes as they would result in a new set of header and source files. This brings its associated changes like makefile updates, checking in new elements. Another problem with the this approach is that you end up with simply too many classes. There is no way to isolate the important classes from the simple helper classes.

The solution to this problem is to use small nested classes that are declared within the parent class. With this approach, the nested class does not appear amongst the top level classes in your design. This greatly simplifies the total number of high level classes you have to deal with. (If you are using a tool like Microsoft Visual Studio, the nested classes would appear as tree nodes inside the parent class. Thus adding a new class does not increase the number of classes visible in the outermost nodes of the tree).

Use templates to improve type safety and performance

Do not restrict yourself to using templates as defined in STL. Templates can be used to provide type safe and efficient code in the following cases:

Divide your code into framework and application parts

Here are a few examples of possible frameworks: